Once Upon A Fashion Fairytale...


Once Upon a Fashion Fairytale...

“Once upon a time, there was a story. Throughout this story, there was royalty, romance, trials and tribulation, magic and a merry conclusion.” This is what everybody has heard or read. Dashing plot lines entertained minds of many, causing dreams of euphoria, pixie dust. However, there is more to a fairytale than just its sequence of
events.
There’s…the wardrobe.
In the past year, there was a mass release of fairytale/fantasy media. 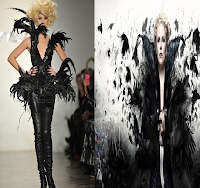 There were movies such as Mirror Mirror and Snow White and The Huntsman. There were games such as Final Fantasy XIII. And, there were garments. The magic of these creations appeared on runways of the world.

Evil Queen Ravenna is known for her dark costumes with details of death and mortality. The poster costume, a high-collared coat of raven feathers and seared leather, received high approval from critics.
A comparable design appeared on the runway at 2013’s Mercedes Benz
Fashion Week. With striking elements, it’s apparent that this piece alluded power.

Every princess needs a gown. The one to the left, handmade of scrap metal, 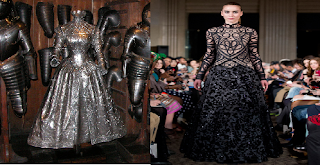 pressed aluminum, and cloth, was used in a 2012 Medieval Showcase. To the
right, a Lucian design appeared in his 2013 catwalk collection. With a similar cut, 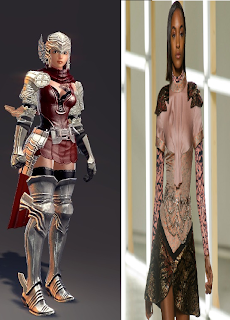 turtleneck collar and the use charred glass and metal on the skirt, it reflects royalty.

There’s always a hero. On the left is a character from the 2012 edition of
Guilds of War. To the left is Robarte attire from his 2013 collection. They share
a common foundation involving hard shoulder detail, waist embellishment, chest
ruching and short A-line skirts. These warriors are prepared for victory!


A happy ending? Of course! A smashing success for all of these designs and their influences. This was truly Once Upon a Fashion Fairytale.