I hope you are doing quite well. It has been forever since I have come with a discussion post that has nothing to do with branding or events. But, I felt compelled to speak on this topic because I saw that many people were outraged by it. If you do not know, Beyonce performed alongside the Dixie Chicks at this year's Country Music Awards her song, "Daddy Lessons." Upon the announcement that she was performing, many people took to social media to voice their opinion that she was unfit for the ceremony, a lot of which because she is a black woman and the ceremony typically has white performers. But, also because she is not a country artist, she is a Pop/R n B artist who just so happens to be from the South. No, releasing one or two country genre songs does not qualify you as a country genre artist. But, she did very well by acknowledging this and inviting the Dixie Chicks to do a rendition of her song with her and add more of an authenticated performance suited for the occasion (which many people have ignored and refuse to give props). Regardless, the backlash that was recieved was entirely uncalled for and honestly quite rude. This allegedly resulted in The CMA's removing any mention of Beyonce from their social media coincidentally after seeing the public's response. 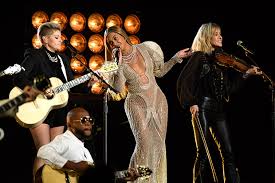 Am I surprised at the reaction of the public? Slightly but not entirely because any time there is change, especially one involving the advancement of a person of color, or the blurring of segregation lines, there is going to be at least some degree of uproar. People are still angry that Barack Obama was President for 2 terms and this is almost a decade later. And generally speaking, his resume and education more than qualified him for what Amercians typically would search for in a President.Thus, I anticipated that no matter how awesome Beyonce performed that many people would hate it, especially seeing as how she is not even a country genre artist. Even if you watch her performance video, linked below, you can see the lack of audience engagement as the nonchalant grimace of many of the audience members. It is a shame but some people can never be swayed from such pitiful mindsets. Haters, for short.

Lest we not feel sorry Beyonce as I know and you know that "Queen Bey" is likely not too bothered. She knows that she is an amazing performer and that her fans will continue to love her despite the nasty remarks of close minded individuals who probably can not shout half of the accomplishments that she can.And they certainly have not stopped her from amassing an empire either. Just to name a few: having an approximated $465 million networth, having won hundreds of awards over her almost 2 decade reign from Grammys to AMAs to even being awarded Fashion Icon of The Year by the CFDA, she is also the most awarded artist in VMA history, plus having held multiple film and television roles, and various fashion lines such as House of Dereon and Ivy Park as well as having supported over 30 charities both financially and personally. With that being said, she has nothing to worry about.

As much as we all wish that haters would not exist, especially when it comes to race, they still are alive and it's not right. That is why you have to put your best foot forward in proving them wrong, as opposed to simply complaining about the matter. And that goes with anything. Do you think that Beyonce would have the leverage of such a successful career if she had not put in the work and sacrifice? No. Watch any of her documentaries or behind the scenes videos and you will see that she stands in her truth, making strides against an uneven playing field and still knocking more "priviledged" artists out of the park. Like the boss that she is, Beyonce gave these people no satisfaction and no response because she knows and we know that her career status speaks for itself. Hats off to you Beyonce.