Thanks for reading and I hope that you're all doing well. I am reporting to you all about the amazing experience that I was blessed to have, attending the exclusive Chicago Premiere Screening for Pretty Little Liars: The Perfectionists! The event was a collaboration between Freeform and Refinery29. 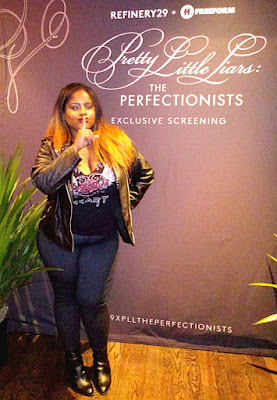 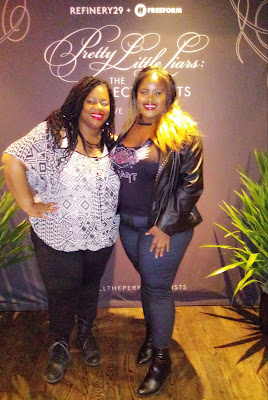 Where do I even begin? I had such a great time with my play sister, Lovely Arielle, that I am almost lost for words. Let's start at the beginning. From the moment we walked in, were greeted with smiles and impeccable treatment on behalf of the staff. From checking us in and distributing our free merch (Thanks for the cool T-shirts, BTW!) to serving us the free snacks, beverages and getting us seated, they were phenomenal! They deserve a reward.


Moving forward to the actual show. I have quite a few thoughts that I want to cover. First, I thoroughly appreciated the fact that The Perfectionists centers around young adults in college, as opposed to high-schoolers. This was a smart move as most of the fans who've grown to love the original over the years, such as myself, have grown up! I'm 23 and I am glad that the series is featuring people closer to my age that are relatable in the scenarios, pressures, and issues that my age group faces. Second, I've gotta say that I'm loving the relationship dynamics between the main characters and it's very interesting, a nice twist from the original. I think it makes the plotline more interesting knowing that they aren't actually friends, at least not in the beginning, but they're moreso classmates who just are drawn together by a common enemy. Thus, my curiosity was spiked and I'm excited to see how their plotlines play out in future episodes, and how their ties will develop or diminish as the story progresses. Lastly, I want to say that I love that Alison is the central focus of the show, foreshadowing that she is less the villainous, antagonist, or bully in this series and is actually a heroine, a savior if you will. It gives her character such a juxtaposed complexity that I'm really feeling. It's great character development and maturation from the original. As quoted in the premiere episode, she went from "Mean Girl to Mentor."

I feel that this is a much better spinoff to the original series compared to "Ravenswood." And, I feel that many people would agree. Caleb, while being an awesome supporting character and very engaging love interest for Hanna (and Spencer), he was not a strong enough leader to drive viewers to a new series that had no other characters from the original. However, with Alison and Mona, I feel they together have the power to make this series EXPLODE just like the original! Also, I must add that Mona definitely makes her comeback in such an interesting fashion for the first episode. Like, didn't you just have people imprisoned in your basement at the series finale of "Pretty Little Liars?" The casual transitions from bullying victim to undercover bully to Liars' ally to antihero to mysterious HR employee at an eerie university that's hours from Rosewood that Alison just so happens to apply to is INSANE. But, I'm here for it! 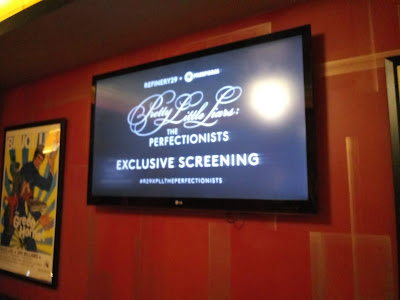 One of the Teleprompters (not actual Screen used for Premiere)

Honestly, as someone who's been to many TV Premieres and Movie Premieres at a variety of theatres, I can say that this one was probably the best! I am very excited for more episodes and seeing where this will lead! In short, it's a PERFECT SCORE from me :) Thank you again to Refinery29 and Freeform, I hope to have the privilege of going to more of your events.

Check Out The Fresh Faces Project On Facebook :  www.facebook.com/freshfacesproject/